Finding a perfect gift for someone can be exhausting. You need to know what that person likes, their interest, and their needs. How many times did you buy a gift for someone just to see them trying to hide their disappointment after opening it?

Definitely one of the worst feelings in the world. However, if you know someone who loves to box or they are huge fans of boxing, today is your lucky day because you will find out about some of the best gifts a boxer or a boxing fan can receive.

Everyone knows who Rocky Balboa is, especially those people who train or watch boxing. Every kid dreams of becoming a Rocky, the legendary movie boxer played by Sylvester Stallone. One of the most iconic parts of Rocky movies are the famous quotes by the original champion in the first movie, Apollo Creed. No boxer or boxing fan would turn down a gift as awesome as this hoodie.

Signed Photo of Their Favorite Fighter

If the person you are buying a gift isn’t that much into autographed equipment or if you can’t find a autographed pair of boxing gloves, you can always search for autographed photos of their favorite fighter. Equipment can deteriorate or get damaged but framed, and signed photos are here to stay.

Even people who aren’t that much into boxing would love to have a signed photo of any legendary boxer. The best thing about this gift is that it can be displayed on the wall for everyone to see.

Since boxing is a sport where you evade punches while trying to hit your opponent, having a good head gear should be a priority. This present might not amaze someone who is just a fan of boxing, but I believe that a boxer would be really happy to receive safety equipment such as a boxing head gear or mouth guard as a gift.

When talking about the most popular boxing characters, Popeye is somewhere at the top probably. With countless generations growing up on Popeye cartoons, this shirt is likely to be a great gift even for those people who are not that into boxing. On this shirt, there is a print depicting Popeye telling the world I am what I am.

You can never have too many boxing gloves if you are a fighter. There is simply no such thing. Sparring or training gloves are a great gift for any fighter, especially because there are so many different types of gloves, different designs, and different colors.

Picking the right ones shouldn’t be a problem because of the diversity. Just know there are different types of gloves for different styles of fighting, you could easily buy ones for MMA and your boxing friend might not have much use for them. If you’re a beginner boxer, check out these beginner boxing gloves.

The heavy bag doesn’t really require any kind of introduction. It is impossible to even imagine a gym without a heavy bag. There are a couple of different types of heavy bags you can choose but don’t worry, you can’t go wrong.

There are really only hanging or freestanding ones. It all depends on your budget. Another great thing you can do while shopping for a heavy bag is to throw in another vital piece of equipment; like a skipping rope.

Since we have gone through a bunch of ideas for home, gym, training, and safety, let’s talk about a present you can buy for a boxer that he can use in his or her car. Mirror ornaments often depict logos from different teams, cities, countries, or national flags.

If you wish to surprise your boxing friend, you can always get them boxing gloves ornament that they can hang in their car. 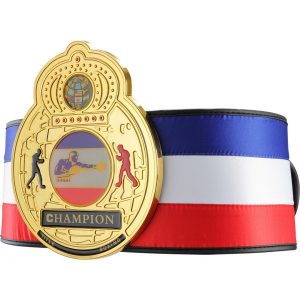 Championship belt. The thing every boxer dreams about. Everyone wants to hold the belt, but very few get the chance. Don’t worry, even though you can’t buy the real championship belt, there are pretty good and fun imitation belts. The best thing about this present is that you can also get a signed version of a belt which makes it more personal and everyone likes personalized gifts!

If you need to get a gift for a child who loves boxing, Revgear Jumbo Gloves are probably the best gift you can get them. These over-sized boxing gloves measure 2 feet in diameter which makes them a safe alternative for kids who like to throw punches. One thing is for sure, fun and laughter are guaranteed with this gift.

If your friend who is into boxing spends most of his or her time at the desk, desktop punch ball might be the gift you are looking for. This punch ball is designed specifically for desks. This gift is easy to use and easy to install which makes it a great gift for those boxing enthusiasts who spend most of their days in the office.