Learning new styles of fighting so that you can apply it to your mma will definitely give you the upper hand if you find yourself in a situation where you need to defend yourself during training. Here we will be taking a look deeper into the Goju Ryu style and its advantages.

Learn about the differences between judo and bjj

What is Goju Ryu? 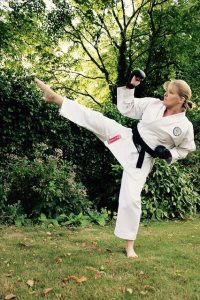 Goju Ryu Karate is a Japanese style of karatedo that exhibits the harmony between the Chinese concepts of hard (go) and soft (ju) that stems from the oldest martial arts traditions. The internal principle of the soft comes from circular movements and the chi while the external principle of the hard depends on physical strength. As such, Goju Ryu is a combination that practices defensive techniques while remaining beautiful and graceful with its flowing forms.

So what are the things that characterize Goju Ryu apart from the concepts of hard and soft? It has the influence of Bujutsu which incorporates grappling and throwing techniques as well as motions sourced from the hips. It also includes Ibuki, a method of breathing techniques that are designed to unite the mind and body as a means of reaching a state of total awareness.

Free sparring is called Jiyu-Kumite, and it makes use of a catleg stance called Neko Ashi Dachi for quicker body position changes that enable efficient combat. It also has the element of Buji which is the ‘gray area’ between conflict and peace. Neither exist in Buji, as it seeks the absence of either and looks for another, a better way to do things that involves none of the status quo and explores the endless possibilities.

As traditional martial arts evolved into most of the common mixed martial arts that are known today, the elements also changed from mere physical conditioning for attacking to incorporating the mind and spirit through different techniques such as breathing exercises. In fact, Greek Pankration participants also showcased their techniques by performing dances that were also the means of transferring the techniques from master to students.

Martial arts relies on grappling and striking in order to achieve being a fighter, but there is also what’s called as a state of total body awareness which draws from mental and spiritual energies in order to be totally aware of every part of your body and how you could utilize this awareness to more effectively hit your opponent.

This tells us the practices such as the Goju Ryu may have roots from the most traditional martial arts that come from Greece. Throughout history, the pattern has been that traditional cultural martial arts adapt techniques and methods from external sources (as in the case of the Goju Ryu which is Japanese in nature but has been influenced by disciplines from China) as they saw fit.

Goju Ryu, mixed martial arts, and other martial arts have a common root in history. These disciplines all incorporate mind, body, and spirit in order to become one efficient fighter. But apart from being just a fighter, these disciplines also teach its practitioners to be well-rounded and self-aware, which matters not just in combat but in real life as well.

If you want to be more aware of what’s happening around you in the midst of combat then Goju Ryu is going to give you some of those important techniques to win.